"I was, in fact, homesick for wildness, and when I found it I knew how intimately - how resonantly - I belonged there. We are charged with this - all of us. For the human spirit has a primal allegiance to wildness, to really live, to snatch the fruit and suck it, to spill the juice." - Jay Griffiths, Wild: an Elemental Journey

I think I have scooped you all up by now, but I had to write one last post to make sure, because OH MY GOD YOU GUYS AMAZING STUFF IS HAPPENING IN MY LIFE!!

I am writing a new book called "Quit That Freaking Job Already!" As part of my research, I have compiled a kick-ass list of articles and resources to inspire you to love your work more.  I will only include these resources in the Journey to Wildness newsletter that goes out tomorrow - Friday, March 22nd.

ALSO, my coaching business has taken off!  I have a lovely client base with whom I meet weekly over skype.  I am honored at how these folks have allowed me to be part of their transformations.  Each beautiful soul is making exciting change in their lives; opening up to possibility where they thought there was none left.  Want in?

Tomorrow's newsletter will also include a coupon for 75% off my coaching services, and you can use it for you OR someone you love who could use a lil' support right now.

Sign up HERE to join the journey and stay with me!  Let's fly into the light together!!
Posted by Unknown at 11:57 AM No comments:


Have you signed up for the Journey to Wildness newsletter on my new site yet?  The third edition will be going out tomorrow, and will include creative ideas for how to quit your job and still make money, my best travel tips for Kauai, and updates on my wild and crazy life.  Don't miss out!  Sign up today!

Join the Journey! Don't get left behind!

Have you signed up for the Journey to Wildness newsletter yet? The next one is going out tomorrow, and it includes ALL stuff that is not on the website - including all the mistakes I made when planning this Hawaii journey. Sign up now! It's free and you can leave at any time! http://www.journeytowildness.com/contact.html
Posted by Unknown at 4:59 PM No comments:

Have you signed up for the newsletter yet?

Later today, I'll be sending out my first newsletter through my new site.  It will include lots of juicy stuff that won't be found on the site itself.  Make sure you all stay in the loop by signing up for FREE now!

http://www.journeytowildness.com/contact.html
Posted by Unknown at 10:14 AM No comments:

I've just published a new blog post on my new website:  Time With My Shadow Side: Feeling My Feelings All the Way Through.

Make sure to transfer your readership and keep up with new posts by visiting the site and:


Hope to see you there!

Much love,
Melanie
Posted by Unknown at 9:24 AM No comments:

Readers, I am counting on you to be my base of support for this new venture.  A baby website doesn't usually generate much traffic but this blog has 89 official followers, and an average of 300+ pageviews a day.  So if you all go over there within the next three days and do the super-simple-and-easy things listed below, our happy family will stay together, and my baby website will be a growing toddler in no time!

As soon as you click on the link and head to the new site, please do three things:


If you are really super-duper excited or feeling especially supportive today, you could even go the extra mile and do a fourth thing.  You could recommend my page to three people you know.

Think about it - I bet you know at least three people at work, in your family, or in your social circles who would enjoy my writing and/or benefit from my Life Transformation Coaching services.  It just takes a quick, "Hey my friend/niece/former co-worker/ex-girlfriend/this-amazing-blogger-I've-been-reading just launched her new business, Journey to Wildness.  She's a great writer and life coach, and I thought you might enjoy being part of her new site."  Or something more authentically in your own words.  (God it's so awkward to promote yourself. . .)

Here it is: journeytowildness.com
Posted by Unknown at 6:51 PM 3 comments:

I Met One of My Heros! And I'm in the Paper!

Last night, I went to see Chris Guillebau - published writer, world traveler (he's almost finished with his mission to visit every country in the world), and self-described challenger of the status-quo.  For the scads of people like me who are passionately pursuing self-employment, publishing, and a life of full-time travel, he is pretty much our god.

My heart sped up as he entered the room before the talk began.  I smoothed my shirt, sat up straight, and checked my bun for stray hairs that might need pinning.  Did I look professional enough?  Would he spot me and be able to tell how much potential I had?  I felt silly, like he was a movie star or a blind date.  For the role he had unknowingly played in my transformation over the past month, he was really so much more.

I had just finished reading his most recent book, The $100 Startup, which lit a fire so powerful underneath me that two weeks ago, I hired a web designer and began spending upwards of ten hours a day on the work of officially beginning my new career instead of just talking about it. 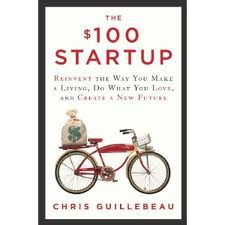 Waiting anxiously for the talk to begin, I spotted my friend, Laina, whom I had invited to join me.  She is in the process of starting her own business on holistic nutrition and had also recently finished his book.  I waved her over, and we pushed through the crowd of a couple hundred people to take seats in the second row.

As soon as we sat down, the woman in front of us turned around and said, "Hello.  I'm from the Santa Cruz Sentinel.  Could I ask you two a few questions?"

"Yes!" I nearly shouted at her.  "Yes please do and I'll tell you my blog and you can put it in the paper! Will we be in the paper?  That would be great!"

She chuckled at me.  "Yes, probably.  Why did you come tonight?"

"Because Chris's book has taught me that anyone can start their own business and live the life of their dreams.  I left my previous career in educational administration last June.  Since then, I've been traveling the country, writing about it, and working up the guts to actually step into this new, self-employed career possibility."

"And what possibility is that?" She asked with one eye on me and one eye on the ipad upon which she was furiously typing notes.

"Well," I took a deep breath in and sat up straight, on the edge of my chair, "I am a professional writer and an online Life Transformation Coach.  I work for myself in a career that I believe really helps people, and I can travel anywhere I want while I do it."

That was the first time I had spoken it out loud, to another person, in the present, as though it already exists.  It was thrilling.  The vibrancy of it shot down my arms and legs and sent heat into my face.

Chris spoke of two pervasive narratives in our culture: the "Times are Hard" story, and the story of "Settling."  One speaks of the poor economy, high unemployment rate, and rising gas prices with its head hung low.  The other shrugs its shoulders and speaks of plugging along, doing the best you can with the job that pays the bills because well, that's just what you do and don't ask questions.

Then he said, "I propose a third narrative.  It's called Creative Self-Employment."  He went on to give several of the examples in his book (collected from over 1500 interviews conducted over three years) of regular people, without business degrees, doing work they love as their own boss.

I looked around the room and could feel the buzzing, collective energy.  I was in a place of people living in the third narrative.  This was a place full of hope, inspiration, and possibility.  This was the right place for me.

You can read the newspaper article here.

I raised my hand to comment at one point in his talk, and then again to ask a question during the Q&A portion.  Chris learned a bit about my life each time (my ulterior motive, obviously).  The third time we interacted was when he signed my book after the talk ended.  He thanked me for my previous questions, and asked a bit more into my journey and my startup business.  I'm pretty sure we're BFF now.

At the after-party at the bar next door, I met several more inspiring people.  Candy is a traveling nurse.  Josh is a divinity school graduate building his business as a marriage and family counselor.  Katherine wants to rebuild Haiti's coffee economy by roasting and selling Haitian beans to American coffee shops.  Eric is building a business making home deliveries of his craft-brewed beer.  Dave installs solar panels on mobile homes.  We shared drinks, laughs, business cards, and a game of jenga.

When I finally arrived home, feeling the best kind of exhausted, I realized that I never looked at what Chris wrote when he signed my book.  I opened it to see:

To show you and myself that I'm serious, you will not hear from me again on this blog until it is to give you the link to my new, published, ready-to-be-joined website.  It is my deep hope that every one of you will come along with me on this next step of my Journey to Wildness.

(Special thanks to my friend, David Crisis, who bought The $100 Startup for me as a gift in mutual entrepreneurship.)